Salsa Verde Cremosa Recipe: Or how to Make That Creamy Green Sauce 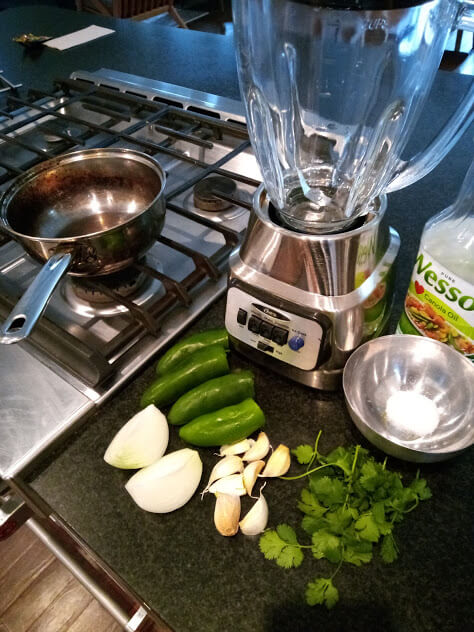 I am currently in a project with my colleague Kim Hill, writing a book about foraging for wild foods in an urban environment. As an aside, I included the recipe for “That Creamy Green Sauce”, and as a public service, I’m excerpting that recipe here. Because you have lived too long without being empowered to make this yourself.

If you’ve had tacos from a cart, you’ve probably had this salsa. If you’ve had it, you know what we’re talking about. It has many names. Some call it “That creamy green sauce.” Others call it fake guacamole (aguatcate falso). Customers of Taco Deli call it Doña sauce, and act like they’ve discovered it, even though Taco Deli’s whole schtick is taking taco cart food and charging three times as much for it so that white people will think it’s great (congrats to Taco Deli for discovering the secret of white people: upcharging).

Once you’ve had salsa verde cremosa, all other salsa seems like a ripoff. Contributing to the mystique is the difficulty of finding it. Some taco carts have it, some don’t. At some Jalisco diners you have to ask for it explicitly if you want it with your pre-meal chips. You will use vague and inaccurate names to describe this salsa, but the waitress will know what you mean anyways and bring out a mustard squeeze bottle filled with that rich green sauce which you dollop onto your chips one by one.

Despite its popularity, it can’t be found in grocery stores. Some carnicerias stock it, but only unreliably, in fresh containers in mini-fridges far from other refrigerated products. You might find some canned products at the HEB which promise to be the creamy green salsa, but they are liars and universally taste disgusting.

You might think you know the ingredients, but you are wrong. Any recipe you see which contains either avocado or tomatillo is wrong. These wrong recipes choke the internet with their wrongness, hiding the truth behind their despicable lies. You must go to Spanish-language Youtube, or here, for this one true recipe for salsa verde cremosa.

Put all the ingredients except the cilantro in a small pot, and cook over medium heat until everything has gone soft, this may take twenty or thirty minutes. Let cool for a while. Pour the contents of the pot in a blender along with the cilantro and blend until the salsa has achieved a smooth, mayonnaisy consistency. This could take a while. Try using different speeds. Serve with chips, or over your breakfast tacos.

It’s pretty simple. Like mayonnaise, the primary ingredient is oil, everything else is just there to make us feel better about slathering that much oil over our food.