How to Make Prickly Pear Sorbet 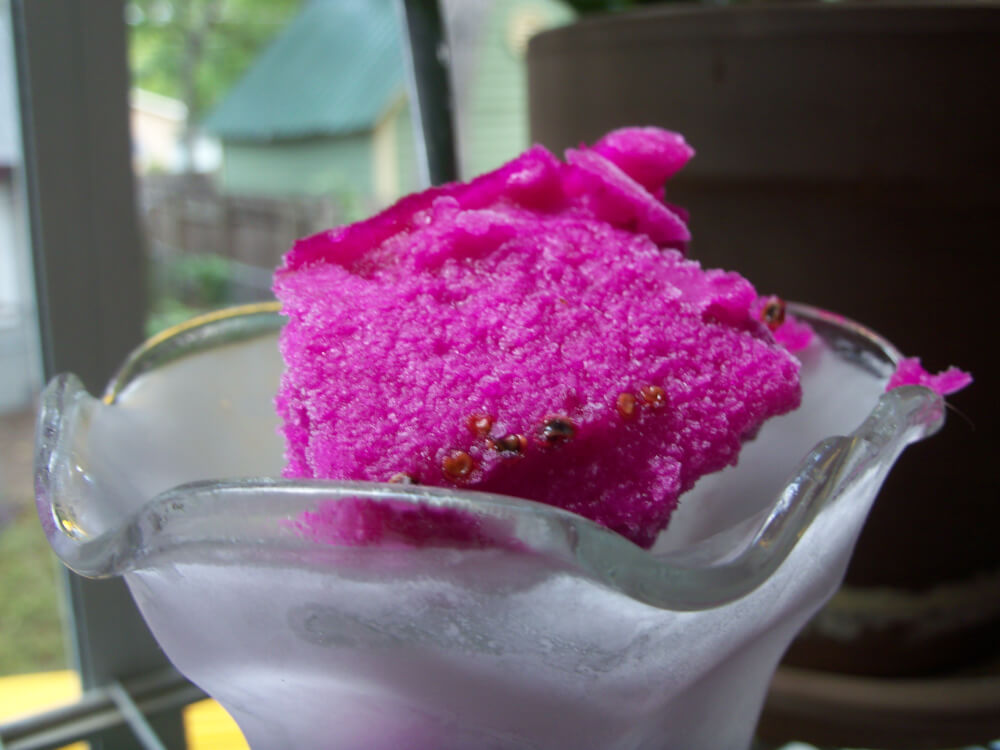 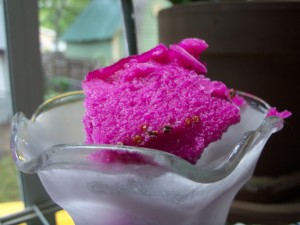 About mid-summer here in Austin, the prickly pear get ripe. They bloat purple in the punishing sun, sprouting with tantalizing juiciness from the middle of daunting thickets of thorns. I pass by a lot of these prickly pear groves on my daily bike commute, the nopalito cactus flourishes in the poor soil and neglect of Austin’s interstitial spaces.

So with the help of gardening gloves and my cargo bicycle bucket, I picked about a gallon of the suckers. Unfortunately, my gardening gloves are only about 90% effective in warding the thorns of the mother cactus, or even the hair-like spines of the prickly pear itself. For weeks afterward I was plagued with the raspy feeling of raspy thorn heads buried just beneath my skin.

I managed to re-stick myself with more thorns as I prepared the prickly pear for consumption. If you soak the fruit in cold water and then briskly rub the skin, scraping off the patches of sharpness that spot the rind like measles, you can remove most of the near-invisible thorns.

With a lemon juicer, I turned the pile of mostly de-fanged fruit into a bowl of viscous, purple juice, and another pile of pulp and seeds. A lot of seeds made it into the juice, but I don’t consider the prickly pear seeds a bad thing. They add texture and no doubt have significant nutritional value in their own right.

The juice retained a little of that slimey consistency that you might know from nopalito tacos. In a sorbet this is a good thing, it makes the finished product smoother and softer than what you would get from a simple fruit puree.

Getting the juice was the hard part. To that, I just added some sugar, lime juice, and rum to taste, and popped the slurry in the ice cream maker

. The final result was not only eye-poppingly purple, but tasty as well.

I’ve been saving some seeds and cactus pads from particularly well-producing examples of the prickly pear fruit. Now all I need is some unkempt interstitial space to grow them in.