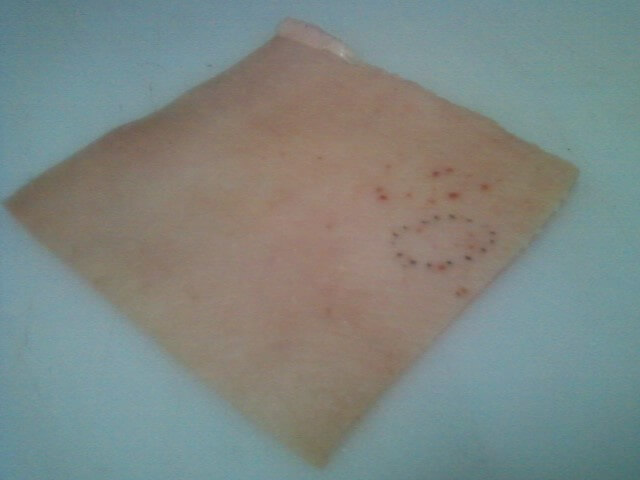 There I was at the Fiesta Mexican food market, standing at the meat counter and I thought, “There’s really nothing keeping me from buying a pound of pig skin.”

The pig skin was cut into perfect pink squares. There was some dimpling, apparently from someone having hit it with a tenderizing hammer at some point. When looked at closely, you could see that the pig skins had tiny blonde hairs sticking out of the pores that glistened in the light. Some of the squares of skin actually had purple tattoos on them. 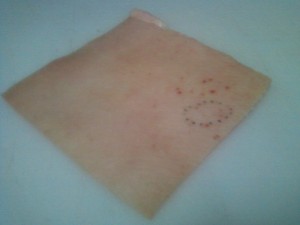 When I noticed that, the thought crossed my mind, “There’s no way to tell the difference between this pig skin and the skin of some white guy. A white guy with some very bad tattoos.”

But that didn’t stop me from eating the skin.

I started by slicing the skin into chicharron-sized strips. It was surprisingly hard to slice through the skin with the butcher knife. If I’m ever attacked by a pig, I’ll have to remember to stab it instead of slashing. 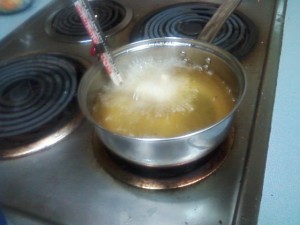 The fried bits were tasty, but they were a bit greasier than I would have wanted. I was hoping that they would puff up like pork rinds, but they ended up with the slightly chewy texture of pork cracklins.

If the distinction doesn’t seem clear to you, it’s probably because you haven’t spent that much time eating out of gas stations.