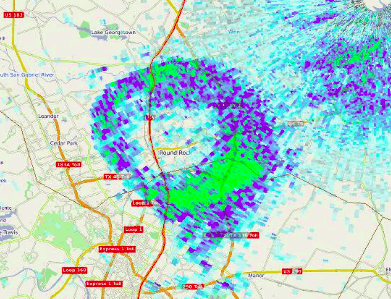 For more than ten years now I’ve been going to see the purple martins. Every summer, from around the second week of July until the second week of August, the purple martins form a roost in a conspicuous urban location, typically a parking lot. When the sun sets, they swarm by the hundreds of thousands, swooping about the sad parking lot trees like the proverbial birdnado. If you follow any of my social media, you know about this. It’s my favorite natural event in Austin, and the highlight of my summer.

The problem is the exact time and place of the roost varies year to year. Usually it doesn’t vary by much. One summer they roosted in the live oak next to the Wells Fargo at Highland Mall, and the next they made a home in the crepe myrtle at the Jack in the Box a block to the north.

The problem came two years ago when the purple martin swarm went missing.

The second week of July came and went, and they weren’t in any of the usual places. After the third week, the local Audubon Society hinted that they had located the roost using their army of bird watchers, but they didn’t release the location because they had not yet received permissions from the land owners. The Audubon Society, bless their elderly nerd hearts, think they own all the purple martins.

So I crawled the web and social media, looking for clues, and I found a tweet from a radar enthusiast, Waystation1067, who posted a GIF of NEXRAD data showing the purple martin roost dispersing in the morning, a fuzzy expanding ring in the weather radar. This is how purple martins are usually located. The cloud of birds is literally as large as an actual cloud.

I watched that GIF over and over, trying to pinpoint the spot, and then at sunset I took my dog and drove around Pflugerville and Round Rock until I found the Pier One Imports parking lot filled with the missing purple martins.

In 2019, I decided that I could rely neither on Waystation1067, nor the Travis Audubon Society. I would find the purple martins all by myself!

It took me until 2am one Saturday night to puzzle out the process (yes, I am the sort of nerd who thinks that’s a really great way to spend a Saturday night). There’s a lot of information on this topic at NOAA.gov, most of which is written for a technically sophisticated audience. To save myself the time of re-researching everything, and to give you a step up in the process, here’s my layman’s interpretation of what I learned.

When you see a weather map on the news or on your phone’s weather app, that comes from the US government’s NEXRAD radar stations. In the Austin area there’s two about equidistant from us. There’s one near the airport in San Marcos, and there’s another one on the north side of Granger Lake, right on the edge of the public hunting lands (I’ve hunted near the radar installation many times). They look like giant volleyballs in person. On the weather radar you can see the random chaff and scatter radiating out from their locations.

The radar you see on your phone comes from a realtime API feed which I cannot begin to fathom just yet. But that’s fine, because all of that is NEXRAD level 3, which is for chumps. To find purple martins, you need the NEXRAD level 2, which has the sort of resolution you need to pinpoint the epicenter of a bird flock down to a quarter mile. (Presumably NEXRAD level 1 is what they use to read our minds and keep us believing that the dollar bill has value.)

Each radar station has its own call sign, and the call sign often corresponds to the NOAA weather district it services. So the radar in San Marcos is KEWX, serving the Austin/San Antonio weather office, and Granger is KGRK, which, I dunno, is just three random letters with a K in front. This is going to be important, because the radar data will be organized by these call signs.

The best way I found to access the weather data was through a Google Cloud public dataset storage bucket. The data is organized by date and then by radar callsign and then by hour. The data tends to be a couple of days behind, but once you figure out which hour the purple martins wake up and scatter through the sky to feed, all you have to do is click and download.

Okay, you’ve got the data, but what about turning that data into a pretty radar image and animated GIF, suitable for posting on a social media venue? I spent a little while perusing the data files, hoping to find a quick and easy JPG archive, but no, this is all in a custom binary format. The options recommended by NOAA seemed pretty challenging, but some digging brought me to the shockingly vaguely named application called Integrated Data Viewer (IDV).

From there it was a fairly easy process of importing data and fiddling with settings and radar angles and reflection quotients and whatnot until I found a recognizable bird flock. And from there, I was able to located and visit the purple martin roost a little before the Audubon Society gave their official permission.

An interesting side observation, in the weeks preceding the flock coalescing in Pflugerville, it looked like a number of smaller flocks were active in neighboring communities like Johnson City. This year, if I have the time, it might be fun to visually confirm the existence of these sub-flocks in person.

If you have any questions about weather radar, I probably can’t help you, it was a minor miracle, and only with the help of scads of documentation that I got as far as I did. But hey, ask away! The purple martin swarm is only a few weeks away, so I hope you’re getting as excited about it as I am!